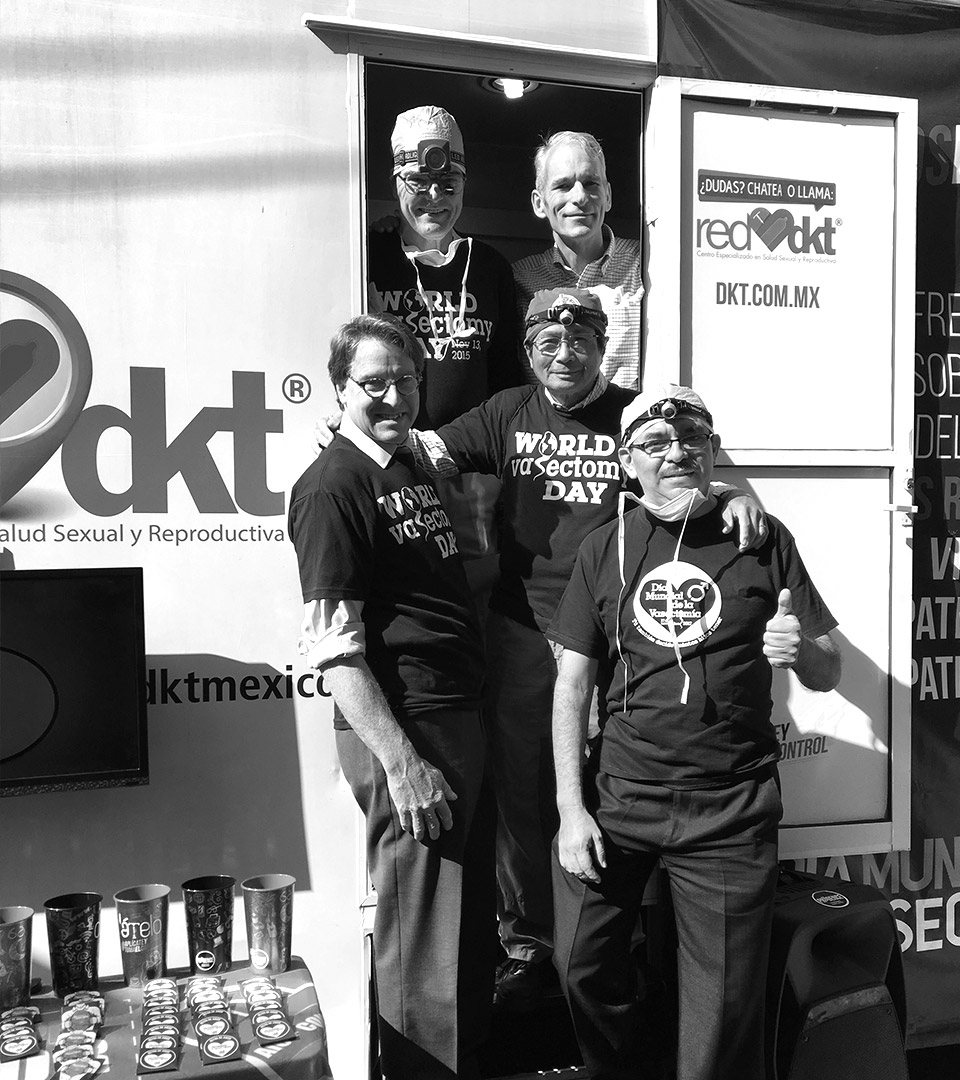 In every country, in every county and every community, there is a percentage of men, however large, who are fully dedicated to the well-being of their families. These men are committed to making conscious and informed decisions that have a positive impact on the well-being of themselves and their families. Their spirit is both aspirational and optimistic.

And although they might only constitute a small minority of the population, these men are your leaders and are, by definition, agents of change.

Research has demonstrated a correlation between vasectomy acceptance and better gender relations. It is not that having a vasectomy necessarily transform a man into a good man, but that men who choose a vasectomy are more likely to treat their women with more kindness, more consciousness and greater respect.

On the day men voluntarily choose a vasectomy, they are at their most vulnerable. Ask a man why he’s getting a vasectomy and regardless of culture, class or country, they almost inevitably speak of love for their children and their partners.  WVD aggregates individual acts of kindness into a collective movement for social good.

WVD’s objective is to become a powerful global movement that emphasizes and inspires positive masculinity and compassionate human behavior.

When these men are provided accurate and compelling information that a vasectomy is a safe and affordable procedure that will allow them to play a crucial role in determining their family size, and that it will not diminish their ability to receive or provide pleasure, or lessen their energy or physical strength, their resistance dissipates.

By equating a vasectomy as an act of love, it transforms resistance into courage. Where there are obstacles to overcome, there are opportunities to increase one’s sense of self-worth.

Once a man has made an informed decision to get a vasectomy, it is imperative that he has access to quality care and a skilled vasectomy provider at an affordable price.  There is no reason to promote a procedure that is not available.  That said, from a public health perspective encouraging men to get a vasectomy makes enormous sense. It is less expensive and less invasive than all other options and something any skilled doctor or even nurse, can learn. The equipment required to do a modern vasectomy is also affordable.

Never forget that the absolute best advocate for a vasectomy is a satisfied client who is willing and able to share his experience with his friends and family.  Encouraging acceptors to become advocates and later champions makes enormous sense.

When you initiate a vasectomy program in a country, getting men, and women, to accept is not easy. The first one hundred require a large investment of resources, but over time, by leveraging satisfied clients into advocates and champions, choosing a vasectomy becomes normalized.  It is why we say, ‘what one man is afraid to do alone, a thousand strong will not hesitate’.  The first adapters often are the most courageous and make excellent spokespeople.

Getting men to participate in their own health outcomes, let alone their reproductive health needs, requires consistent communication.  At present in the US, women visit a doctors 3x more than men.

Women must be included in any communication strategy. Yes, there are plenty of men making decisions on their own and the ultimate choice to get or not get a vasectomy should be the man’s as it is his body being operated on, but women play a huge role in family planning decisions and getting them on board is critical.

Getting men to be conscientious and responsible should begin before boys/young men are sexually active. Communicating with men in their teens or early 20s about a vasectomy might seem irrelevant, but keeping it as part of the overall conversation will bear fruit a decade or so later.  The truth is, for most, a vasectomy is the ultimate option in a life time of family planning choices.

Instead of directly asking men if they want a vasectomy, it is more effective to frame the conversation around the following three questions:

A:   How important is it to you that the quality of life you offer your children is better than what you experienced?

B:   Does the number of children you have affect your ability to offer them a quality of life to which you aspire?

C:   Do you want to be part of the decision-making regarding family size or leave it up to your wife or partner?

The answer to (a) is inevitably some variation of ‘Yes, and that’s why I work so hard’.

The answer to (c) is also inevitably yes – often accompanied by an assertion that if they don’t talk about family size, they’re likely to have more children than they would have otherwise wanted.

As well as educating men, we have to support vasectomy providers – be they urologists or family doctors.  Many are hesitant to do vasectomies and certainly injecting pills or hormones into women’s bodies is easier and carries little risk for the physician.  To support our doctors, we have teamed up with an on line network of providers called the Vasectomy Google Group as well as launched a series of training programs and an annual summit.

Just as we work to transform vasectomy acceptors into champions, in the WVD narrative our strategy is to present our providers as heroes.

We have imagined a vasectomy as a ritual of personal transformation. Many of the ancient rituals centered around fertility. This made sense when life span was particularly short and maintaining the right population size for each community was required for survival.  Today, equilibrium and coherence is achieved through consciously limited population size. To that end, we envision and celebrate a vasectomy as a ritual of infertility that transform a man from ‘procreator’ to ‘protector of life’.

Income replacement or any form of recompense regarding fertility comes with a spotted history of coercion and manipulation – usually of the poorest of the poor.  That said, facilitating and encouraging men to make a hard choice that benefits both themselves, their family and society can make sense in certain contexts, as long as it’s done transparently and does not impose on anyone’s human rights.

We always need to make it eminently clear that a vasectomy is a permanent form of birth control, even while acknowledging the possibility of reversing a procedure.  While a reversal is not guaranteed, and is more expensive, it should be available wherever there is a robust vasectomy program.

As well as supporting vasectomy providers and educating the general public, in most countries, a vasectomy program cannot achieve ‘scale’ without national and local government support. To that end we collaborate, whenever possible, with Ministers of Health and work to support, where needed, the develop of standards and policies to support an effective vasectomy program. In many countries this also means working with service delivery oriented international and local NGOs.

We recognize that for many people there’s a direct link between choosing a vasectomy and an overwhelming concern for the planet’s well-being. We certainly agree that being conscientious about bringing life into existence is extremely and that the reproductive choices we make impact our lives and those of future generations.

That said, we don’t believe that ‘over-population’ is a productive term as it implies that some part of society and some individuals might be considered excess humanity. For us, each living person has the same rights to a fulfilled and fulfilling life with opportunities for all.  Yet, while numbers do not determine our destiny, there is no questioning that every single major social problem with face is made more difficult to overcome with a growing population.  For humanity to achieve its full potential, we don’t need another billion people, we have to do a better job of caring for the almost 8 billion already here!